For many years, when I used to hear of people who did not teach their children about Santa, and I used to think they were being hyper-vigilant. I believed that the teaching of Santa as purely harmless and interesting fun for children and these fundamental Christians were robbing their children of a precious childhood experience.

Then, one day, around 2001 I believe, I began to change my mind while listening to a talk radio program concerning the subject. This occurred a few years back on the morning before Christmas Eve. The host of the show was discouraging parents from allowing children to be privy to the on-air conversations, as she asked listeners to call in to tell their tales regarding various ways they encouraged the belief in Santa or told fun stories about their own experiences as children in regards to the big guy.

Some called in to say how they faked reindeer prints in the snow, or how their kids reacted to the treats left for Santa and the reindeer and that kind of thing.

However, there were three callers that morning who left me wondering if all of this teaching was truly harmless.  And this all, was of course, before the Elf On The Shelf made his appearance.  I recall reading an article last year somewhere that the premise and use of the Elf On The Shelf readies children to live in a police state.  I can understand that completely. 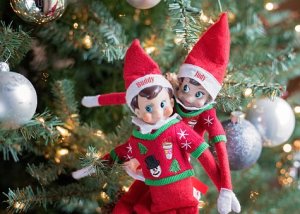 The first caller was a woman who sounded like she was in her late 20’s or early 30’s called in to say that her brother had been so traumatized when he discovered that Santa did not exist that he was considering not teaching his own children about Santa, should the day come when he did have children of his own.

This came as a shock to me as I’d never heard of anyone actually being traumatized by this revelation.  Disappointed, sure.  Upset, absolutely.   But traumatized?

Then I got to thinking that Santa is very much a god-like character, who supernaturally watches children constantly and is ready to reward them or punish them based on their behavior. He is a figure who can perform magical feats in a single evening. It would be tough to argue that Santa Claus does not sustain the qualities of a god.

In my own experience, I knew I personally was not traumatized upon the discovery that Santa did not exist, although I do certainly remember the moment of this discovery. The very fact that I do remember that moment when my mother told me the truth, made me wonder if it was not more significant than what I had previously thought because we all seem to remember the moments when we discover significant events.

Think of news events. Many can recount where they were and what they were doing when they first heard of the death of Michael Jackson or the bombing of the Twin Towers on 9-11.

I would think most people would remember the moment it was finally revealed that Santa was a myth, thereby making it a significant event. I’m not sure if it is so much a loss of innocence, but a revelation that trust has been broken in some way.  I highly doubt any adult would look back upon this revelation as a moment that brought them joy or peace or anything positive.

And while I don not consider myself traumatized by the revelation of the truth, because I still knew that a God who loved me existed, I had to wonder about homes where there is no God spoken of, and Santa is the only god-like figure? 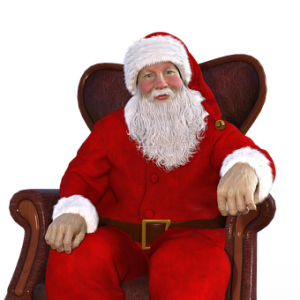 A second caller to the radio program that day again also gave pause to the jovial and light-hearted tone of the show.  She sounded like a senior, and when she spoke she almost sounded confused as she told her story, stating that she too, like the earlier caller, had been completely devastated when she learned that Santa did not exist. Despite this fact, she did teach her children about Santa and carried on the tradition. It seemed to me that she didn’t know what else to do, except blindly perpetrate the belief.

Caller 3 – What To Do About That 13 Year Old Kid That Still Believes?

The third caller that morning called in about her acquaintances – the parents of a 13-year old boy, who was still an enthusiastic believer in Santa. His parents had gently been trying to ease him into the truth, dropping hints and so forth, but the child remained an avid believer, never, ever questioning the belief.

The host suggested that the child may be ‘milking it’, but the caller was adamant that this child really did believe and that this was a growing concern for the parents, given the fact that he would be entering high school the next year!

We Parents Know It’s A Lie

I then really began to rethink why we parents perpetrate what we know is a lie to our children. Of course we don’t want to call it a lie but realistically, that is what it is.

We may call it a white lie, but it’s actually quite colossal – A man is watching and judging us all of the time. And based on what he sees, the most anticipated day of the year will be affected. It will either be full of joy or full of despair. And we repeat this every year, with songs and stories about him, his reindeer and his elves. That’s not a white lie.

Some of us even go to great extremes because we want to make absolutely certain that children will wholeheartedly believe the lie! We want to see wonder and excitement in their eyes.  We want to hear them say cute and innocent things or ask funny questions about Santa. We want them to believe in magic, although we know that eventually, we will need to reveal to them that the entity we taught them to believe in so strongly, does not exist at all.

And then, at a certain age limit, we need to shatter their world.  To some, maybe just a little… to others, maybe quite a lot. 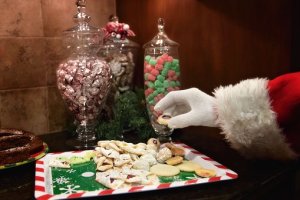 And why is this okay? Because everyone is doing it.  That’s the reason, right? We parents are all in it together. A child can look at the parents of all of his friends and see that this must be okay. No kid has it any different. They’re all telling kids the same thing so it must be right.

But what if your neighbor came to you and told you that she was teaching her daughter that there is a little dwarf from the planet Jupiter who, when the children are asleep, watches them. This little dwarf poops in the shoes of children who are bad. But, if the children are good, he places bananas in the fruit bowls to help them grow big and strong. Would you think this woman needed psychological help?

But let’s take that one step further. What if she asked you if you could also teach your child about the little dwarf from Jupiter so the belief would seem more legitimate should her children ever decide to compare notes with your children on the subject?  You would likely protest and possibly even tell her what a bad idea that was.

Are We Manipulating Or Taking Advantage of Children?

We parents who were taught about Santa, blindly teach our children about Santa, knowing it is completely false.

However, when it comes right down to it, when we knowingly teach children a lie, are we essentially manipulating them? Are we taking advantage of the fact that because we are their parents, they will believe everything we tell them without question? And knowing we have that kind of authority, do we really want to choose to tell them such a colossal lie, for years and years?   I would guess that this backfires on some parents later, to the point where the kids begin to start questioning what the parents are telling them.

I will admit that I also did, without a thought about it, teach my own child about Santa Claus. If I had to do it over, I would not.

I used to debate a lot with atheists, who would frequently compare the belief of God to the belief in Santa, the Tooth Fairy and/or the Easter Bunny.

And I’m not trying to make a gargantuan jump and saying that all atheists are non-believers because they were traumatized as children when they learned that Santa did not exist. However, as stated earlier, I always found it both frustrating and interesting that atheists so very often make the comparison between God and Santa Claus. I do think there might be something there.

Incidentally, even Richard Dawkins, admitted, in a 2014 talk, that Santa could, in fact, “equip the child to reject supernaturalism when the time comes”.

Intrigued by the whole subject, I had tried back then, to find psychological studies regarding children and the Santa belief, but to no avail. If a small city’s talk show radio host produced three calls wherein the belief proved to be harmful to the child, it seemed to me that this subject was worthy of further examination.

Conclusions From The Study

Luckily, there is at least one that we can point to today and it does suggest that the belief in Santa could produce sinister results.   Two psychologists authored an article published in the journal Lancet Psychiatry.

Lead author, Chris Boyle, a psychologist at the University of Exeter said, “Some parents use it as a tool of control when they’re under a bit of pressure in the lead-up to Christmas,” said Boyle. “It’s potentially not the best parenting method. You’re talking about a mythical being deciding whether you’re getting presents or not.”

Co-author, Kathy McKay, a clinical psychologist at the University of New England, Australia said “The Santa myth is such an involved lie, such a long-lasting one, between parents and children, that if a relationship is vulnerable, this may be the final straw. If parents can lie so convincingly and over such a long time, what else can they lie about?

Read more about the study  here. 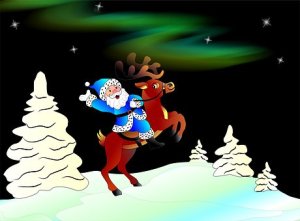 Do you remember when you first learned that Santa did not exist?  What was your reaction?  Was Santa a god-like character to you?

This site uses Akismet to reduce spam. Learn how your comment data is processed.