I had a vegan cheesecake at a restaurant the other day and resolved myself to trying to make one.

I could tell you it took several times and many attempts to get this perfect cheesecake but honestly, I guess I just had all of the right stuff in mind.  It rarely happens when there is no trial and error.  This was trial and instant success.  It’s simply spectacular and I don’t think I can improve on it, so here it is.

If you haven’t used vegan condensed sweetened coconut milk, it’s time you tried it! This is the brand name I used. I found it in a bulk food store, but it’s on Amazon and also here. Note: this can is labelled 320 grams but the one I used is 350 grams. Be sure to use the sweetened and condensed, not just the condensed for this recipe. 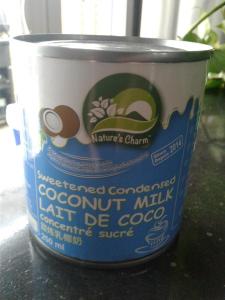 It’s creamy, decadent deliciousness on a plate.    Try it once and you will rave on as other will also.  I have omni friends requesting the recipe so it is time to get it up on the web! 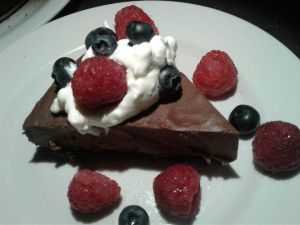 In food processor, or by hand, process the cookies and then add the melted vegan butter until mixed well. Press the mix into a 9 inch cheesecake pan and cook for about 10 minutes. Let it cool to room temperature, or close to it.

To make the filling, over a double boiler, melt coconut oil and chocolate chips, stirring occasionally.  When melted, add to food processor along with all of the other ingredients and process til smooth, about one minute, stirring and scraping sides.

When the crust has cooled to close to room temperature, add the filling and place the cheesecake in the refrigerator at least 5 hours til it sets.

Serve with berries and vegan whipped cream, if desired.

It can last in the fridge several days, and freezes beautifully.

Don’t be afraid to make this beautiful cake – it’s a no fail recipe and you can divide it up for later use.

This site uses Akismet to reduce spam. Learn how your comment data is processed.